Going 'old skool' with intermediates from all our local groups for a night of roller skating at Cowles Stadium - EPIC! 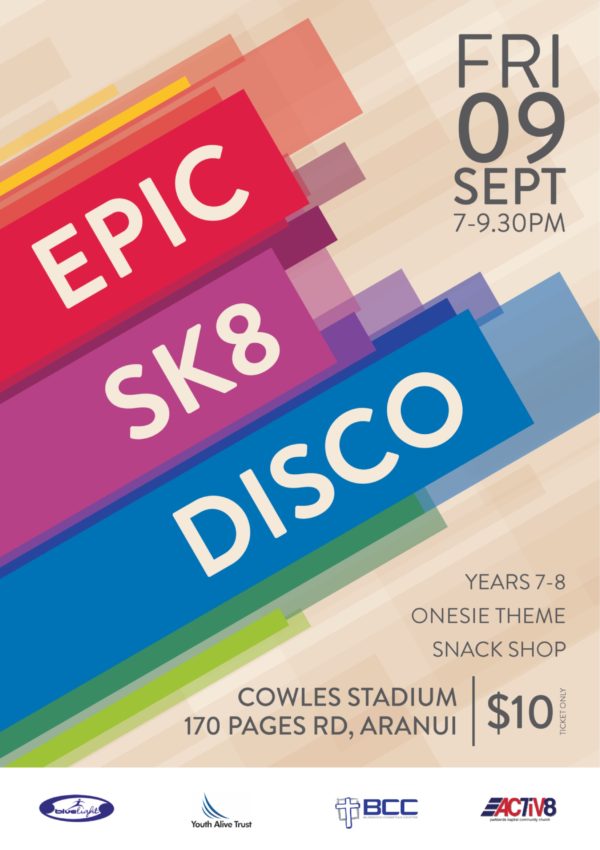 Coming soon… our joint Eastside Sk8 Disco at Cowles Stadium on Friday 9th September from 7:00pm – 9:30pm.  Tickets cost $10, including Skate Hire.  Bring your school mates and get into the spirit by wearing your onesies!!  Café is also available.  Tickets from the school office or Youth Alive Trust or one of the local intermediate youth groups.  Only 100 tickets!!

It’s Sk8 Disco time again! For any Year 7 & 8 from the east of Christchurch @ Cowles Stadium. Limited Tickets though, so snap them up asap from YAT offices or the school offices at Rawhiti Primary, South New Brighton Primary or New Brighton Catholic Primary for only $5. And if you’re game – come in a Black & White theme costume!

Another awesome Sk8 Disco at Cowles Stadium!  100 intermediates from all our local school and 5 youth programmes.  Thanks to Blue Light for their support, and all the volunteers who skated their hearts out!  Here’s all the best photos…